At my second half marathon ever (the Cayman Islands Half Marathon, December 2014), I met someone who was an invited speaker at packet pick up and who also ran the half marathon on race day. As a new runner, I was very unfamiliar with races, important people, major events and just an awful lot about the sport in general. I went to his talk and got a bit of a sense of just how well known and well respected this runner was. I certainly enjoyed his stories about his running adventures.But I still didn’t really know much about him.

Until I went home and Googled him.

Bart Yasso. Runner’s World Chief Running Officer. A man who has probably forgotten about more of marathons he’s run than I will probably actually run in my life. He’s finished Badwater 146 and is a five-time Ironman. (Learn more about him on his website. You will be inspired!)

Go ahead and laugh. I was new to running. That’s my excuse and I’m sticking to it. I know who he is now.

After I finished my Cayman race that December morning with a PR time of 1:58, I went to cheer runners in to the finish line. I saw Bart Yasso there doing the same, so I went and said hi, asking how he was enjoying his visit to Cayman. In our discussion, he said he was going to be in Bermuda for race weekend the following moth. Coincidentally, I was going there, too, thanks to the fact that my husband was headed there for a work trip. I was tagging along with him to run the half marathon and visit friends. Bart and I snapped a post-race selfie and said we hoped to see each other in Bermuda. I continued on my way and didn’t think much of it until I posted that picture on Facebook. People started commenting about my meeting ‘running royalty’ and how awesome it was that Bart Yasso was down to support the Cayman Islands Marathon. 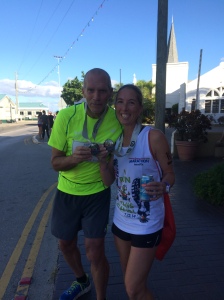 Hanging with Bart Yasso at the finish line of the Cayman Islands Half Marathon, December 2014

Then I saw Bart in Bermuda (January 2015), both during the race and after finishing. We got another selfie (which I then learned was affectionately called a Bartie). 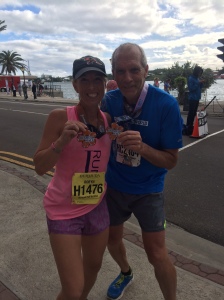 Hanging with Bart Yasso at the finish line of the Bermuda Half Marathon, January 2015

New to running. Seeing with and talking to one of the icons of the sport at both races. And having him remember me (he calls me ‘Cayman Islands’ or ‘Bermuda Babe’, which is part of my Twitter handle). I know the running world is small, but it’s not really that small. I certainly was in the right place at the right time in terms of feeding my growing interest in the sport.

Continuing on with my 2015 racing schedule, I made the decision to run my first marathon – the Marine Corps Marathon (October 2015). I also added the Tulsa Route 66 Marathon (November 2015) and the Richmond Half Marathon. Guess who was at all these races.

He called ‘Cayman Islands!’ to me when I ran past him twice on the Marine Corps Marathon course. When I said something to the effect that I’d see him in Tulsa, I believe Bart tweeted back to me ‘all the cool kids will be there.’ Bart clearly has never met my high school self. I’m not even sure anyone now would consider ‘cool’ as a top 500 word to describe me now. But thanks for saying it. And yes. There were a lot of ‘cool people’ there. And I had a fantastic time when he called me in to the finish line of my Tulsa run with my shiny new PR.

At this point, it became a bit of a joke with my running friends in the Meg’s Miles group that I was ‘stalking’ Bart Yasso. I’ll let you decide. I have seen him a few more times since. 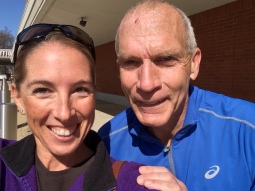 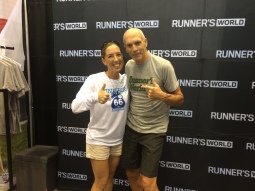 Another race, another picture with Bart Yasso. Chicago Marathon 2016 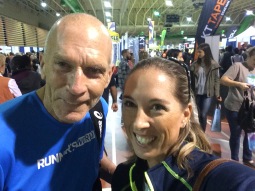 Look who I found! Richmond Marathon 2016

I’ve now been running races for about 2 1/2 years, with a grand total of 18 races (7 half marathons and 11 marathons). I have seen Bart Yasso at nine of these races. Nine. I may be wrong, but this does seem like a bit of a high Bart Yasso-to-race ratio. (And I don’t think I missed any.)

This year, Bart is retiring from his position as Chief Running Officer. I hope it doesn’t mean that he is finished running, but rather it means he won’t be travelling every weekend for work. I hope he still plans to enjoy attending and participating in race weekends, but maybe his retirement will allow him more flexibility in trying new races, experiencing things that continue to inspire him along the way. He truly is an ambassador for running, taking time to speak with runners at all levels. I think this was one of the things that helped me embrace the sport – seeing and experiencing the experts of running helping me to grow as a runner.

Without a doubt, Bart deserves a fantastic retirement. And I promise to get at least two more selfies with him this year to add to my collection. I know he’ll be at Ogden, and I hope to catch him at least somewhere else this fall. Because I don’t know who I’ll take selfies with once he is retired!

I will still curse his name when I do my Yasso 800 workouts. Some things will never change.

Congratulations, Bart! Wishing you many happy miles in your retirement.

6 thoughts on “Selfies with Bart Yasso”