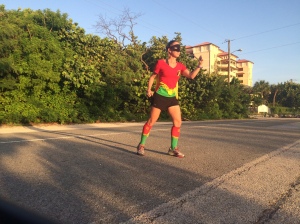 13 September 2015: I ran a virtual 5K in one of my SLOWEST 5K times of 29:30: the Superheroes Kick Butt Virtual 5K. I feel like I am allowed a pass on the time because I ran 13.1 miles the previous night, a mere 12 hours earlier. This was a bit of an impulse run (I could do this run anytime in September), but I happened to see my friend Scott early on the Saturday, and he invited me to run with him. I put him off, saying I would be happy to join him in a few weeks. Later, on my actual long run that same day, I crossed paths with Scott again, so I knew running with him that weekend was meant to be. I told him to send me the details and oh, by the way, I would be wearing a superhero costume. Then I continued on to finish the 9 remaining miles of that run.

Waking up early on Sunday, I did not feel like running. But I got dressed, had a Clif bar and headed out. It was HOT and it was only 6:30am! I mean in the high 90’s heat index. My fabulous costume was cotton and thus NOT ideal to run in. Especially the knee-high socks! I was already planning for a slow run, hoping that I wouldn’t slow Scott down too much.

I arrived at the appointed meeting place, stretched and took a few pictures of me in my outfit for laughs. Then I saw Scott pull up after a nice 8-mile, 56-min start to his run. Oh, did I mention he was pushing a chair that had two heavy bags of sand in it? Yes. He runs 7-min miles doing that. (I however, couldn’t run a 7-min mile if someone was chasing me let alone run eight of them!) At first he didn’t recognize me, or maybe he just didn’t really believe that I would show up in a superhero costume. Then he got the joke (Robyn as Robin) and had a laugh. I warned him I would be slow, and that he was welcome to take off whenever during our run to get the training in at the pace he needed.

Thankful to run with the Nikki’s Voice team, who graciously allowed me to slow them down for a couple miles!

It was at that time when Nikki and her parents pulled up. Nikki is Scott’s running partner, and she has cerebral palsy. She is attempting to be Cayman’s first assisted marathoner, and with Scott as her partner, I have no doubt they will be amazing on race day (6 December 2015)! Nikki was gracious enough to pose for a couple pictures with me so I could remember this run as a truly special one. Awesome how this virtual race worked out because the medal that I will receive was designed by one of the IR4 buddies (www.whoirun4.com) and features someone in a running chair just like Nikki’s! I’m so pleased that I can send one of these to my buddy, K-Man, and would like to present the second medal to Nikki! I hope it will inspire her to complete her marathon in December. (Follow Nikki’s Voice on Facebook.)

We then set off, with Scott and Nikki slowing down to match the fastest pace I could muster: about a 9:25 pace for the time they were with me. Let me explain: Scott is a beast. He has completed many marathons and ultra marathons. He is fast. He is fit. He coaches running classes. He was scheduled to run a 100-miler in Key West this year the last I talked to him in the spring. When I recently asked him about the dates for that race, he told me about Nikki’s Voice, how he had switched from the Keys run to this effort, and today I was able to learn more about his motivation to be part of Nikki’s attempt at being the first assisted marathoner in the Cayman Islands.

Superheroes Kick Butt medal. I wonder if Nikki would like one?

Apparently a year ago, Scott had surgery on his knee and didn’t know if he would ever run a marathon again. During his rehab process, he was scheduled for therapy at the same time as Nikki one day, and they became fast friends. It was at that point that his focus shifted, and he decided he never wanted to run another marathon alone; instead, he wanted to share the race experience with Nikki. Now that they are such a great team, Scott said that if Nikki wants to do another marathon after this, they will do it. If she wants to do an ultra, they will do it. And if she wants to do an Ironman, then they will pack their bags and head to Kona together.

After 1.5 miles, I was feeling a bit of a slow down, so I let them take off (apparently my super power was being able to slow Nikki & Scott down!) and continued the remaining 1.6 miles on my own. It was fun to have the chance to be a bit silly on a run instead of taking myself too seriously. At one point someone on the road yelled ‘You’re looking great, Robin!’ which made me laugh. If only the shirt and socks were not cotton…I would definitely wear this again if they were tech material!

So that was my chance to enjoy a morning run, and do it with Nikki and Scott. How fitting to run this with an assisted marathoner when money raised from this event goes to benefit buddies in the group to provide chairs like this so they too can experience the thrill of a race? I have to say, it was fun, even if it wasn’t my best effort. Looking forward to doing another run in my superhero costume someday soon! 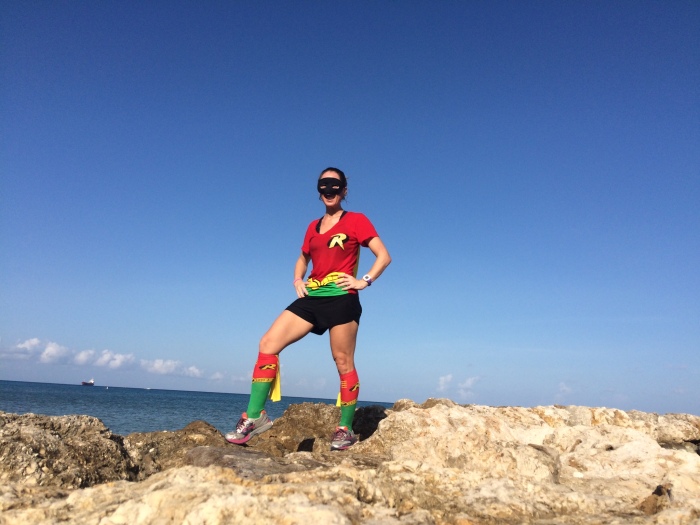