My fall race season is about to begin, and I’m starting it with the Berlin Marathon – one of the world marathon majors! (The other world marathon majors are: Boston, NYC, Chicago, Tokyo, and London at the time of this blog. There are plans to add a couple more races to this list.) My only other race experience in Germany was the Dusseldorf Marathon, which was not only my fastest marathon, but it was also one of my favourites. Germans are known for their attention to detail, precision and running a tight ship, and Dusseldorf was a symphony of all these traits being woven together to produce a seamless running event. The Berlin Marathon will be much larger, and I am still expecting a similar level of organisation for this prestigious event.

You see, I thrive on order, organisation and having even the smallest details attended to. One would not be surprised to find out that my heritage contains German roots on both my mother’s and father’s sides. So it all makes sense. Germany makes sense to me. I can’t wait to go there and stop a crosswalk when it shows the red man and not have people look at me funny. (Because yes, they all stop at crosswalks and wait for the white man to appear. Germans do not cross against the light, and you will not find anyone jaywalking, I’m sure. If you do, they are most likely tourists.) My husband will be in the minority here, and I will be vindicated in my desire to follow all the rules.

But back to the run. I’ve stated that I’m not a fan of the really big races, but I feel like Berlin may win me back a bit. I’ve heard nothing but great things about it, and I know it is a fast course. Besides, that weekend is the start of Oktoberfest, which means I will be able to drink great German beer upon crossing that finish line. That is definitely my favourite part of the marathon.

For the Berlin Marathon, I will also be carrying one of the 22 Too Many heroes with me who has ties to Germany. Not only was SPC Christopher Cash stationed in Baumholder, Germany, during his time in the Army, but his mother and her family are from Germany. This will be a chance for him to return to a place that is important to his family. Berlin is a 7+ hour drive from where SPC Cash was stationed; however, I will be ending my visit to Germany in the area that was his home in Germany. So I guess I will get to see a few places that he likely saw while stationed there. And I hope that his family are happy to see him making a return visit to the country where his mother was born. I look forward to sharing this visit with him. 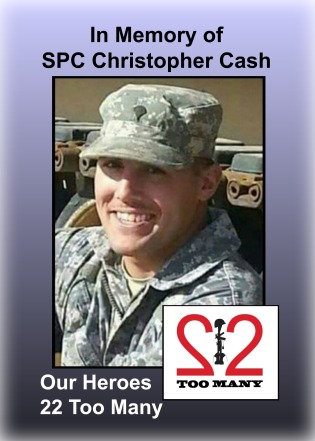 Christopher Earl Cash, 25, passed away on Saturday, November 1, 2014, in his home. Born in Virginia, he served in the U. S. Army for 4.5 years as a Mechanic and served in Afghanistan in 2011. He loved his family and friends, and will be remembered for his sense of humor. His hometown was Norfolk, VA. His hobbies included working out at the gym. He ALWAYS had a smile on his face and made others laugh.

Christopher loved being stationed in Baumholder, Germany after his tour in Afghanistan. His grandparents live in Germany, and his mother is from Germany.

“Chris will be missed by many (young and old). He had that effect on everyone he met. Such a charmer, and a respectful young man Hoping and praying that the memories can pull you all through this difficult time. Many prayers for the entire family. He is gone, but will never be forgotten. Much Love and Respect for the people who were cherished enough to have known this young man, and have him in your life.” (From his memory page.)

As always, I’ll carry not only this soldier with me; I’ll also be carrying his family. I know they miss him and would give anything to have him back. I hope they appreciate that he is honoured and remembered on 24 September 2017, as he joins me for the Berlin Marathon. Let’s do this SPC Cash! #BeatBerlin42