Ok, I made it through the Cayman Islands Half Marathon (3 December 2017) after basically not having run since the Richmond Marathon (11 November 2017), and it wasn’t too bad. In spite of fairly high humidity and lack of running, I had a respectable 2:08 finish. I was cognizant that it needed to be run as a training run as much as possible…which mean that when I had 9:00 min miles for the first three miles, I needed to slow down so as to not sabotage the Kiawah Marathon just 7 days later.

Which brings me here. Yes, I’m running a marathon this weekend – the Kiawah Marathon, and I’m still determined to focus on running with joy, in spite of a very rough patch in my personal life (that will get much worse before it gets better. Details will eventually be shared, but not just yet). Joy is something you sometimes have to work for. In a race, when you are running low on energy, the legs hurt and you are wishing you were back in your bed instead of running, joy is a choice.

Sometimes I can easily make the choice to be joyful. Other times, I am miserable (or just not feeling it on a run) and it is much harder to find the joy in the experience. However, I think that is when trying to find it is so much more important. First and foremost, I am able to run. How many people would give up an awful lot to have that option? How many people struggle to get out of bed every day? Instead, I’m out there, using my body the way it was intended, and I’m choosing to be unhappy? Nope. That is not allowed right now. All my runs might not be great runs, but I am working on that choice to find the joyful parts of the experience – from the camaraderie I have with so many wonderful people to the finish line feeling (and the immense joy I have when I can STOP running after 26.2 miles!) to mailing that medal to the family of the person for whom I run. It is truly a joy to be able to run these races, and I promise to honour SPC Jordan Tyler McDaniel, with his fantastic smile, by choosing joy as I run in a new state, surrounded by friends, and remembering a true hero. I hope he enjoys the time touring Kiawah in his home state of South Carolina.

Tyler was in the 1st Battalion 32nd Infantry Regiment.

Following is a note written by Tyler’s cousin and close friend Daniel Dean.
Jordan Tyler McDaniel had been struggling and in a deep dark place for years. He had a hell of a deployment to Afghanistan. He saw many of his buddies get killed in front of him. He dealt with a lot of survivor’s guilt. Tyler was my younger cousin but was more of a little brother to me.

All he ever wanted to do was be a grunt in the military. He enlisted at the age of 17. After his deployment, he couldn’t adjust and ended up getting medically separated from the Army. That broke his heart. He called me in his darkest hours. I was helping him, but he was also helping me. I don’t open up to many people, but Tyler brought a lot out of me. I loved him even more for that.

Tyler, I hope you get assigned as my guardian angel cause you’ll have the toughest job in Heaven…….Daniel Dean
*****************
Tyler took his own life after struggling with PTSD. 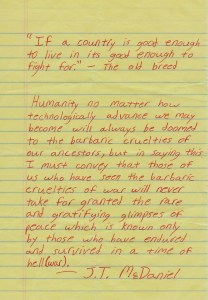 Note written by SPC Jordan Tyler McDaniel to his uncle.